The Dropper was an underworld figure who operated a transportation service for fugitives out of (pre-Communist) Cuba. He had light hair, and a neatly-trimmed moustache.

The Dropper was fiercely protective of his identity, always using an alias and refusing to allow people to see his face (though this may also have been result of his face being pockmarked).

The Dropper agreed to fly the fugitive Miss Egghead back to the U.S. In addition, he offered to dispose of Dick Tracy for her, just as he had done with Supt. John Whitehall and several others. After Tracy was ambushed and subdued at the home of Chicory by Little Gorilla, he was placed on board Dropper's plane. When Tracy awoke, he was given a parachute and was pushed out of the plane by Miss Egghead. At the last moment, Tracy managed to grab her handbag, which contained her money, gun, and his 2-Way Wrist Radio.

Soon after, Cuba suffered a severe tropical storm. Dropper was met at his airfield by Chicory and Gorilla, who were trying to escape the island. The strong winds and flooded airfield prevented them from taking off. Eventually the water rose so high that the airplane flipped upside-down. The fuel tank ruptured and the flooded passenger cabin was filled with gasoline and fumes.

At this point, the fugitives discovered that the police had tracked them down, including the recently rescued Dick Tracy. Dropper refused to believe it was Tracy, and was certain it must be a ghost.

When Chicory insisted that he would not be taken without a fight, Dropper warned him against firing his gun. Chicory ignored the warning, and the flash from his gunshot ignited the gasoline fumes. Dropper and his associates tried to escape the flames under water, but all three men drowned. Their bodies were soon recovered and identified. 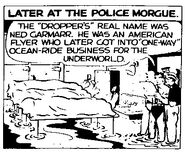 Add a photo to this gallery
Retrieved from "https://dicktracy.fandom.com/wiki/The_Dropper?oldid=23622"
Community content is available under CC-BY-SA unless otherwise noted.