The man known as "The Brush" was a confidence trickster who wore a specially made wig that had hair coming down to cover his face.

The Brush operated a fraudulent organization called “No Inc.” claiming that fall-out from the use of atomic bombs had caused his condition. As a result, over one million dollars in cash was mailed to his organization from unsuspecting donors. As the scheme started falling apart, The Brush killed his associate Hindrix, and escaped with a large bag of cash, avoiding Dick Tracy and other officers.

The Brush wandered the city carrying the money in the bag over his shoulder. The Brush was eventually caught by Tracy while fleeing into the open countryside in a stolen laundry truck. He escaped from custody in a police car, but was apparently killed when a dynamite trailer he was hiding in was struck by lightning. The money he was carrying had fallen from his truck as he fled, but was later recovered by Tracy on a nearby farm.

Years later, a man resembling the Brush (who was addressed as "Brush") was involved in a plot surrounding Perenelle Flamel's "immortality" formula. He and his accomplice Kitchen intended to steal the money that the wealthy buyers would use to bid on the formula. They were stopped by Dick Tracy and The Spirit. 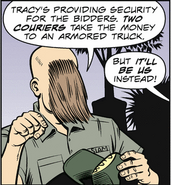