Rikki Mortis is the girlfriend and accomplice of Abner Kadaver. She is a slender young woman with short black hair, light brown eyes and full lips. She typically dresses in "goth"-style clothes and sometimes wears a painted beauty mark on her cheek.

As a young adult, Rikki was a friend of Dethany Dendrobia. Rikki had a talent for mechanical engineering and also some skill with computers.

Rikki aided Abner Kadaver in several ways. She smuggled him out of prison after he had faked his death, and she abducted Bonnie and Ray Tracy as part of Abner's plot to trap and kill Dick Tracy. When Abner pursued Dick Tracy to Europe, Rikki took on Abner's contracts and committed killings on her own. She often used her vehicle known as The Vampire Car.

After Abner was presumed killed, Rikki swore revenge on Dick Tracy and his friends and family. She contacted Police Chief Pat Patton's nephew Packard in prison and recruited him as part of a plan to lure Chief Patton into a trap. Rikki chased Pat Patton in her Vampire Car, but the vehicle's operations were taken over by the artificial intelligence known as Matty Squared. Squared was working for Mr. Bribery, who disapproved of Rikki's methods, so Squared destroyed the Vampire Car.

Rikki was able to jump clear of the vehicle before it exploded. She was arrested by Chief Patton.

Some time later, Rikki was shown being transported to a hearing. She was intercepted and freed by the returned Abner Kadaver. They escaped to a hideout where Abner provided her with new outfits that matched her previous ones. At this time, her skin had seemed to have taken on a more pallid complexion. 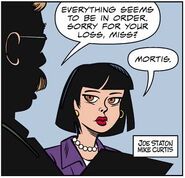 Rikki Mortis as a youth 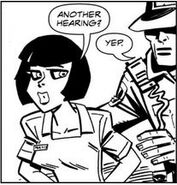 Rikki Mortis in prison clothes
Add a photo to this gallery
Retrieved from "https://dicktracy.fandom.com/wiki/Rikki_Mortis?oldid=27959"
Community content is available under CC-BY-SA unless otherwise noted.