Dick Tracy had been on the gang's trail since he had arrested one of their members for hitting Junior with a car. Tracy suspected a man by the name of Arthur Maylie to be one of them, and went to an ex-politician and associate of Maylie's named Shirtsleeve Kelton (a known associate of Maylie's) to gather more information. Kelton refused to help Tracy, then contacted Maylie to arrange a meeting.

Tracy followed Maylie after his meeting with Kelton and discovered that his friend Jim Trailer (an FBI agent) had been assaulted by agents of the Purple Cross Gang. Tracy aided Trailer while the gang members escaped.

At this point, the Boss decided to become more ambitious in the gang's schemes. He purchased four fast cars and chauffeur's uniforms, intending that the gang would commit bank robberies far outside the city, at such a distance from each other that there would be no discernible pattern.

After the first such robbery, Baldy Stark (the gang member known as "4") began to have pangs of conscience, partially because his gang activities were keeping him away from his young daughter. Around the same time, Shirtsleeve Kelton agreed to tell Dick Tracy anything he learned about the gang's activities. As the case progressed, Kelton's information on the gang's whereabouts always proved to be faulty.

Dissention in the Ranks[edit | edit source]

Meanwhile, the gang was disputing over how to divide their stolen money since Baldy Stark had left the gang without taking his share. The gang forced the Boss to agree to an even split. Fearing that the gang was about to be taken over by the traitorous Maylie, the Boss later caught his own gang off guard and mowed them down with a machine gun.

The Boss then went after Baldy Stark at Stark's home. When the Boss arrived, Stark turned out the lights and managed to shoot and kill the Boss when he accidentally knocked the refrigerator open in the darkness. The leader of the Purple Cross Gang was then exposed to be Shirtsleeve Kelton himself.

Baldy Stark was arrested and was about to be sentenced to death when Tracy testified on his behalf, reducing Stark's sentence to twenty years in prison. 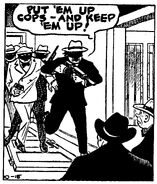 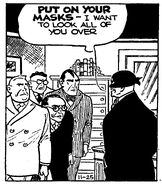 The remains of the gang, unmasked 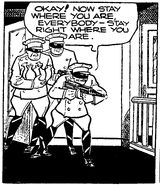 The gang in disguise
Add a photo to this gallery
Retrieved from "https://dicktracy.fandom.com/wiki/Purple_Cross_Gang?oldid=26933"
Community content is available under CC-BY-SA unless otherwise noted.