Dick Tracy: The Complete True Hearts and Tommy Guns Trilogy
The Complete Dick Tracy Vol. 5
Karpse (full name unrevealed) was a producer of poison gas for a foreign power. He had a long straight nose, light hair, and a sparse moustache.

After the conclusion of the Jojo Nidle case, Karpse's accomplice Marro suggested to Dick Tracy that he should investigate Karpse because of his involvement with the female foreign agent Halone.

Karpse learned that Tracy and FBI agent Jim Trailer were after him, so he and Halone attempted to escape with a supply of poison gas but were involved in a crash. Karpse then detonated a bomb on a plane and Tracy and Trailer were poisoned by the gas, rendering Tracy temporarily blind.

Traveling on foot through the woods, Karpse and Halone were attacked by a bear. Karpse abandoned Halone, who was killed by the animal. He then made his way to the city, where he took a job as a baker at Mrs. Trueheart’s delicatessen using the alias "Janings". He also found Marro and brutally assaulted her. He threatened to kill her unless she continued to help him.

Karpse was badly scalded when a water heater at the delicatessen exploded. At the hospital, Karpse was identified by Jim Trailer. Karpse attempted to escape, but accidentally lit himself on fire and was killed by the blaze.

Appearances in Other Media[edit | edit source]

Karpse does not appear in the 1990 Dick Tracy feature film.

Karpse is a character in the comic book prequel by John Moore and Kyle Baker. In the comic, Karpse was part of a gang of thieves who were stopped by Dick Tracy. Karpse was the only member of the gang who managed to escape from Tracy alive, and he took shelter in the underground hide-out of The Mole.

Karpse had his face changed by Doc Hump. While he was recovering, the hide-out was infiltrated by Dick Tracy (who was disguised as B-B Eyes). Karpse saw through Tracy's ruse and the three criminals prepared to dispose of Tracy. Other police officers arrived and Karse and Hump were arrested. The Mole was killed while trying to escape. 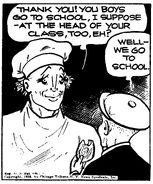 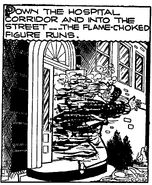 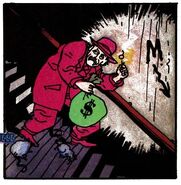 Appearing in the movie tie-in comic book
Add a photo to this gallery
Retrieved from "https://dicktracy.fandom.com/wiki/Karpse?oldid=26189"
Community content is available under CC-BY-SA unless otherwise noted.