Chester Gould
Honeymoon Tracy (sometimes "Honey Moon" or just "Honey") was the daughter of Dick Tracy Jr. (Junior Tracy) and the first visitor from the Moon to Earth, Moon Maid.

Shortly after they were married, Moon Maid learned that she and Junior were expecting their first child. Moon Maid wished to have the baby on Earth, but after she was the victim of an attempted murder, her father (the Moon Governor) insisted that she return to the Moon. Junior joined her, and they prepared for their child's birth, communicating with Earth via the Moon's mile-high broadcast transmitter.

When the transmitter became damaged, the Governor arranged a trip to Earth for supplies in a space coupe. Moon Maid and Junior joined him, planning to have a visit with Junior's family. Moon Maid had concealed the fact that she was very near delivery, intending to give birth to her child on Earth. She went into labor on board the space coupe, and Honeymoon Tracy was born in outer space.

The announcement was broadcast to the world. Honeymoon was born on September 12th (weighing 6 pounds and 2 ounces) with the ability of magnetic hands (as shown when paper clips clung to her hands), though this ability later seemed to have subsided. Her eyes resembled those of the Moon people, but she lacked the characteristic horns. Instead, her forehead bore two small protrusions covered with soft blonde hair.

When she was a baby, she was nearly kidnapped by the villain Mr. Bribery, but this was prevented.

During her childhood, Honeymoon frequently traveled back and forth between Earth and the Moon. She was comfortable among both humans and Lunarians.

When Honey was a toddler, she was present at the death of her mother when Moon Maid was blown up in a car bomb that was meant for Dick Tracy. Concluding that the crime syndicate known as The Apparatus was connected to the murder, Junior agreed to send Honey with Tess to California to stay with Vitamin Flintheart until the danger was subsided.

While in California, Tess and Honey were treated well by Vitamin, who read books to Honey with his usual dramatic flair.

A few months later, Honey and her grandparents flew to Washington State to see the Tracys' daughter (Honey's aunt) Bonnie. Bonnie expressed how much she wanted to get to know her niece. Honey and the family were taken on a tour of Washington and the Yakima Indian Reservation where Bonnie taught. Honey had remained safe on the reservation when Vitamin and Tess were carjacked by aspiring musician Bony and his girlfriend Claudine.

Even though Vitamin and Tess managed to escape danger, the stress of the event caused Tess to go into labor in the car. Honeymoon met her baby uncle Joe in the hospital shortly before they flew back to the The City, where Honeymoon was reunited with her father.

Honeymoon soon gained a new stepmother in the form of Junior's longtime friend Sparkle Plenty (whom he had known since she was born), whose wedding was nearly blown up by Angeltop Jones. Honey was one of the people in the church at the time, but survived unharmed.

Sparkle proved to be a very affectionate mother and loved Honeymoon like she was her own. The same was true for B.O. Plenty and Gravel Gertie (her new step-grandparents), who gave Honey a mandolin for Christmas.

Honey made some new friends when the Wheelers (family that Junior knew) moved in next door. Keenan and Seth Wheeler, the younger

Wheeler boys, initially didn't want to be friends with Honey because she was a girl, but Honey managed to win them over with some reverse-psychology, .

The three kids encountered Chief Patton's adult nephews at the local video arcade, and the older men bullied them out of their money. Following Junior's advice, Honey, Seth, and Keenan started their own version of Junior's original Crimestoppers Club. The three children arranged another situation where they expected to be bullied by Pack and Pete Patton, planning that the arcade manager would be able to witness it, which he did. The next day, Keenan witnessed Pack Patton giving the manager some money from a large roll of cash, leading the Crimestoppers to suspect that they had obtained their money illegally. The Crimestoppers initially intended to spy on the Pattons, but later decided against it.

Honey grew suspicious of a "kindly" old woman named Norma Rockwell who lived in their neighborhood. Mrs. Rockwell smelled of cigar smoke and never invited the kids into her house when she would give them milk and cookies. Honey's suspicions were confirmed when she saw Mrs. Rockwell kick a cat, and seeing different TV repair trucks parked outside her house everyday. Honey reported this to the Major Crimes Squad, which led to their discovery of a major stolen goods trafficking operation. The Crimestoppers were commended for their alertness and public-spiritedness.

When B.O. Plenty opened a Dick Tracy-themed amusement park, Honey was present. She was riding the Ferris Wheel with B.O. when a strong fissure induced by buried toxic waste in the ground was set off, destroying the park. No one was badly hurt.

Honey later worked with the Crimestoppers Club (which now included her nephew Joe and their friend Fries) to expose a dog-napping ring that was operating in the neighborhood. They later inadvertently exposed some new neighbors who were in the FBI's Witness Protection Program.

Honey has continued to be involved with Dick Tracy (who she calls "Pop-Pop") and the Major Crimes Squad. She played a role in uncovering B-B Eyes' bootleg DVD operation, as well as finding a body at Abner Kadaver's Halloween attraction.

Honeymoon is a fan of the pop singer Themesong. Honeymoon was instrumental in the capture of Phishface after she herself was "phished" when purchasing Themesong's CD.

When a mysterious new "Moon Maid" was seen around the City, Junior and Sparkle tried to keep this information from Honeymoon, fearing that it would traumatize her. However, the internet-savvy Honey found links to the photos and news stories on her own. Tracy arranged a trip in Diet Smith's remaining Space Coupe to take Honeymoon to Moon Valley to investigate the mysterious sightings.

Tracy, Smith and Honeymoon arrived in Moon Valley, and found it deserted. Tracy and Smith deduced that the Moon People must have constructed their own Space Coupes and abandoned the moon. Honeymoon remained convinced that her mother was alive and became determined to find the truth (though this belief may have changed in light of subsequent events).

In addition to the Major Crime Unit's investigation in to the new "Moon Maid", Honeymoon used her own network of Crimestoppers to track the mysterious woman's movements. "Moon Maid" eventually visited Honeymoon at Junior's home. Honeymoon expressed her doubts that this "Moon Maid" was actually her mother, and explained how she herself was different from a typical Lunarian.

It was eventually revealed that the new "Moon Maid" was actually another woman who had been physically and mentally altered to resemble Honeymoon's mother. This woman decided to remain as she was and took the name "Mysta Chimera". Honeymoon's reaction to these news was not depicted, although she later expressed a desire to get to know Mysta better, feeling that the Moon was still part of her heritage. Honeymoon declared that she would like to consider Mysta as an aunt or a cousin, which pleased Mysta. They began to address each other with the Japanese addition of "-Chan" to their names as an expression of affection.

Some time later, during a visit with her new friend Annie Warbucks, Honeymoon revealed to her family that her Lunarian ancestry had started to manifest, and that she had grown Lunarian horns and developed telepathy (which allowed Mysta to pick up her emotional state). Afterwards, she also manifested the ability to discharge electricity, which she had difficulty controlling. For example, she inadvertently shocked a schoolmate who was bullying her and another girl. Honeymoon attempted to learn to harness this newfound power with Mysta's help, and was later able to use it to defend herself during a confrontation with Mr. Bribery at the 52 Gallery.

In 2016, Honeymoon and Mysta became the targets of an anti-Lunarian fear-mongering campaign by Congressional Representative Bellowthon. Bellowthon claimed that the Lunarian presence on Earth posed a threat to the future of humankind. Following Bellowthon's murder (by her fundraiser Selfy Narcisse), anti-Lunarian sentiment seemed to wane.

Honeymoon met and befriended the girl known as Ugly Crystal, unaware of Crystal's family connection to Mr. Bribery. When Crystal broke away from her criminal uncle, Honeymoon was supportive. Crystal became one of Honeymoon's best friends, though Honeymoon also remained close with Annie Warbucks. Honeymoon also considered Mysta to be close confidante, informing her of a burgeoning romance with her male friend Astor. When Mysta was abducted and held captive by Brock Archival, Mysta was able to send a telepathic distress call to Honeymoon, who conveyed the message to Dick Tracy. 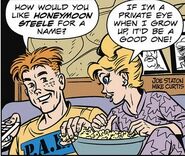 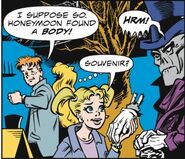