Dick Tracy: The Complete True Hearts and Tommy Guns Trilogy
The Complete Dick Tracy Vol. 2
Doc Hump was a physician with connections to the underworld. He was bald, with a pointed nose and a hunched back.

Doc Hump was summoned by Larceny Lu to treat the injured Steve the Tramp, but he was subdued and bound by Scotty Bumpsted who took his place. Lu recognized Scotty and captured him, giving him to Doc Hump. Doc Hump was about to experiment on Scotty when one of Lu’s men unwittingly lit Scotty’s cigar/smoke bomb, leading to the two men being arrested.

The Return of Doc Hump[]

Later, Doc Hump was freed from jail and he went to his family mansion. He injected dogs with rabies and planned to kill Dick Tracy with them. Doc planned to test them on his butler, but Tracy showed up in time and rescued the servant.

Doc Hump went to unleash another dog on Tracy. The dog turned on Hump and tore his throat out.

Appearances in Other Media[]

Doc Hump appeared in the comic book prequel to the 1990 Dick Tracy feature film. He was an accomplice of the Mole who restructured criminals' faces for them. He was captured along with Karpse after Dick Tracy infiltrated the Mole's hide-out. 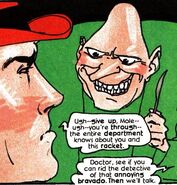 Apperaing in the move tie-in comic
Community content is available under CC-BY-SA unless otherwise noted.
Advertisement