The Complete Dick Tracy Vol. 27
The man known as "Big Brass" was confidence trickster who operated in Dick Tracy's city. He was a slender man with light eyes and light hair. He often wore faux brass rings though his ears and nose. He also played the guitar.

Big Brass operated a scheme in which he hijacked television broadcast signals to interrupt popular programs with commercials for his brass "health rings" (actually made of plastic) as a supposed cure for various ailments. He would fly in a helicopter that was equipped with a powerful transmitter which interrupted television broadcasts. When not in use, the transmitter was hidden inside an abandoned silo.

Brass was superstitious, and he used the advice of his girlfriend Crystal the Seer to determine which nights he would and would not broadcast. Brass' accomplice Dr. Waters thought that this was foolish, and he insulted Crystal and her precognitive abilities. Brass then killed Waters by smashing his guitar over Waters' head. Brass and Crystal fled and went into hiding, while the MCU engaged in a manhunt for Brass.

While hiding at Crystal's fortune-telling studio, Brass injured his back when he was forced to hide under Crystal's chair. Crystal tried to help Brass, but he became enraged with her and beat her up, injuring her jaw and giving her a black eye. Brass left Crystal's studio and sought treatment at the office of orthopedist Dr. John Ardow. Without Big Brass' knowledge, the police were called to the office by Ardow's nurse, who recognized Brass as a wanted man. Brass shot Dr. Ardow (who later recovered) and took the nurse hostage in an attempt to escape police custody. Brass was killed by Dick Tracy, and the hostage escaped unharmed.

While recovering from the injuries inflicted by Big Brass, Crystal cooperated with the police. She was later killed by gang boss Brain. 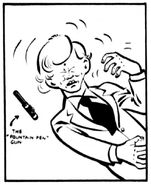