The Complete Dick Tracy Vol. 21
"Little" Notting (full name unrevealed) was the founder and leader of the 52 Gang. He took the title of Ace of Spades. He had dark hair, heavy eyebrows, prominent lips, and a letter A tattooed on his forehead. At some point in the past, he had been convicted of murder and escaped from prison.

Ace of Spades arranged for the King of Spades (his most trusted confederate) to steal the Space Coupe and kidnap Dyne O'Matick so the gang could get rid of its enemies more easily. Ace was captured by Dick Tracy who had infiltrated the gang. Tracy unmasked and arrested Ace. He warned the gang to give themselves up, but they ignored him and were apparently all killed.

Years later, a man addressed as "Mr. Notting" was shown to be on the high council of the Apparatus. He stated that he preferred to be known as "Ace of Spades" (January 3, 2016). It has not been officially confirmed that this is the original Ace of Spades. 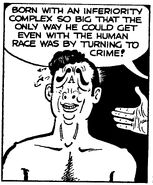 Ace of Spades in 2016
Add a photo to this gallery
Retrieved from "https://dicktracy.fandom.com/wiki/Ace_of_Spades?oldid=27545"
Community content is available under CC-BY-SA unless otherwise noted.